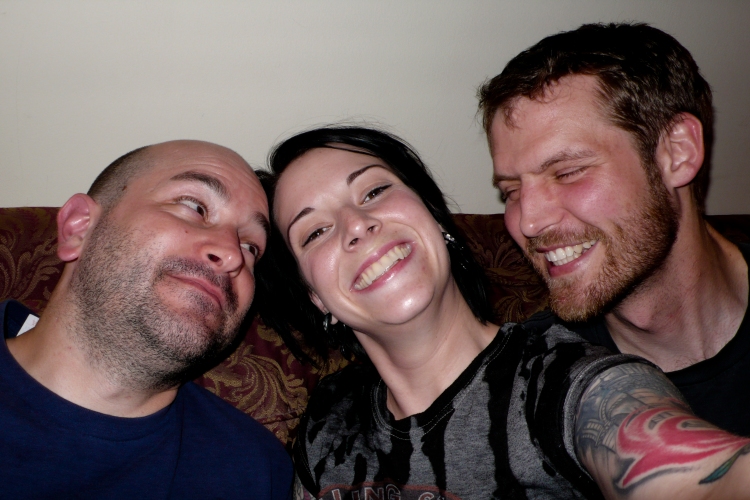 Couch #1 belongs to Nic and Erik.  They live in Glendale in a townhouse style apartment.  Nic is a make-up artist at Sephora and the mother of Alexis, age 11, and Josephine, age 3.  She likes to go to drag shows for the amazing make-up.  She studied opera at the Peabody Conservatory.   She and I are friends and met in a bar in late 2008.  Her favorite songs are “Hysterical” by the Yeah Yeah Yeahs and the A-Team theme song.  Her favorite movie is “Bringing Out the Dead”.  She likes Buffalo wings.

While all of the moving I mentioned in the previous entry was going on I had this project to start.  My first couch would be an interesting one.  I would be sleeping on my own couch.  That’s right, with the help of my friends, my couch was transported across town.  To where, you might ask?  To the home of the bride and groom whose wedding I just shot.  Yes, I would be spending the first night of the tour on my own couch at Nicole and Erik’s place.  After dropping off the couch, dropping off the rental truck, and taking a shower, I headed over there.  What would the evening hold?  And would I be able to stay awake for it?  I arrived around 7pm, just in time for a home cooked meal with them and Nic’s 11 year old daughter Alexis.  Roasted chicken, mashed potatoes, and snow peas were on the menu.  That, and a cold beer.  After a week of not wanting to put anything in the fridge and not having time to cook, it was quite a reward.  Dinner was followed by the Simpsons, Star Wars figures, and monkeys in suits.  In my packing, I had found a trunk full of my old toys.  Evel Knievel, GI Joe, and Star Wars figures were among those items.  I had mentioned this on facebook and at Nic’s nudging, I brought them along.  Nic and Erik already had the office monkeys set up on their coffee table, and with some careful rearranging, Princess Leia was discussing sexual harassment with HR and Luke Skywalker was involved in a battle.  Soon it was getting late and after and it was interview time and some photos (look for some more of each soon).  I dug out my list of questions and my various cameras and snapped away and recorded.  Everything went fairly well considering I hadn’t looked or thought about the questions in a week and came up with a list of photos I needed off the top of my head.  After that I had another Blue Moon and it was time for bed.  Erik works very early and knowing that I would likely wake up when he left, I wanted to get some shuteye.  Did I mention that I had slept 2 hours the night before as well?   Being as it was my couch, I knew it was comfortable enough at least for a nap…when you are drunk.  But would I make it through the night?  As exhausted as I was, I could’ve slept on a sharp rock.  But, as expected, I basically awoke when Erik went to work.  It wasn’t simply the movement of another person in my presence as I slept, it was also the fact that I was anxious to get back to moving.  So as soon as Nic was up to take Alexis to school it was off to moving.  Oh, and one last thing, did I mention the lotion.  I have dry skin and tend to need a little moisturizing lotion on my face in the morning.  Having left mine at my old apartment, I co-opted some of Nic’s.  It was some sort of a mint scented lotion.  I had that scent in my nose all day, which was a good thing.

My name is Dean MacKay. In June and July of 2010, I slept on 50 different couches in 50 consecutive nights. I took photographs of the couches, both as a couch and as my bed. I took portraits of my hosts and interviewed them. I documented their homes on film and digitally as well as in a journal. I was treated to home cooked meals and intimate secrets. I was cared for when I was ill and checked in on after I was long gone. There were sleepless nights and busy days and times spent discussing the past and dreaming about the future. I drank a lot of coffee at a lot of different coffee houses. There were old friends who became closer and acquaintances who I now call my friends. There were even strangers who invited me into their homes. Threads were woven among them all. My skills were honed as I practiced my craft on a daily basis. I learned many things about my hosts and I continue to learn many things about myself. These times are unforgettable. This journey was initially born out of necessity. The economic times had taken their toll. But the fruit of this labor is not simply financial. It is emotional and spiritual and societal. I tapped into something that is still developing. And as it develops I will share with you this knowledge as well as providing you a way to share it with others. I hope that you will support me as this journey continue and grows. I plan to unveil many things from this work including a coffee table book on the couches, and perhaps other books and a documentary. I'm also hoping to get the blog carried on a major website. Of course, and second project is also in the works although what form it will take has yet to be determined. Any assistance or advice that you can offer to further these projects is welcome. Your support, both financial and emotional, is crucial to my success. Thank You. © Dean MacKay 2010
View all posts by 50 Couches in 50 Nights »
« 50 Couches Launch aka Too Much Stuff
Couch #2 – Madame Pamita – June 1st, 2010 »