RSS feed for this section
This category contains 1 post 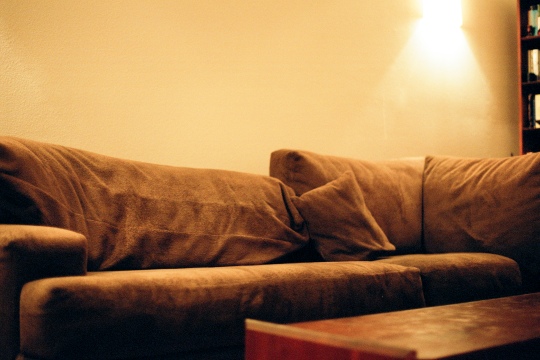 Couch #4 belongs to Alex and Steve.   The couch is apparently a pain in the butt.   Alex enjoys Craigslist and when they moved in to their place, she started buying couches like every week.  She would buy one, bring it home and not like it.  And then she would sell it.  She’s skilled enough at Craigslist that she would usually make a profit.  Steve felt like he was moving couches all the time.  This one was the display model at a furniture store in The Valley.  The couch was delivered through the window.  It’s so big it doesn’t fit through the door.  They are trying to sell it, but are probably stuck with it.  I thought it was very comfortable.   They are married and  live in Townhouse, that they own, in Echo Park, California.  She works in web analytics, and he is a scientist.  They have one cat named Frasa, although I probably spelled that wrong.  Alex enjoys hanging out, walking staircases, and travel.  Steve likes to play chess.  Steve was a dumpster salesman for Waste Management after college.  That’s what a physics degree will get you in Arkansas.  We met when we were drunk on wicked strong beer at our mutual friend Wil’s birthday party in January, although I had been to their  home when Wil had lived there.  One of Alex’s current favorite songs is “Melatonin” by Silversun Pickups.  Steve like Led Zeppelin, and would probably pick the “The Ocean” as his favorite song.  He also likes “The Empire Strikes Back”.  Alex likes “2001: A Space Odyssey”.  She like Mexican food. Steve likes his Mom’s lasagna.  Alex hopes that I don’t get hacked up.  Oh, and yes, this project is part of the stimulus package.